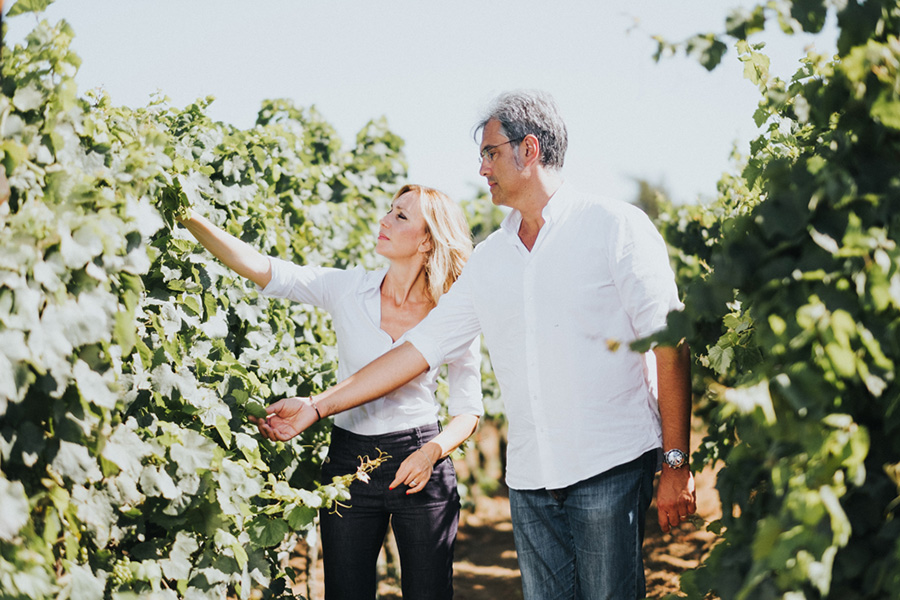 In the mid ‘80s the Rubino family began to build the farm, making acquisitions that, in a decade, formed an important production base for a total of 500 hectares.The founder is Tommaso Rubino, a firm believer in Salento’s productive potential, who gives rise to a production project based on best expressing the values of the viticultural tradition of Puglia. His son Luigi with great determination, in 1999, embarked on this new challenge, which led to the birth of Tenute Rubino.With a new vinification and ageing cellar in Brindisi and the designation of an entrepreneurial project focused on the production of quality wines, Tenute Rubino started facing the big challenges of today’s wine market.The efforts, over the years, have been amply rewarded, thanks to constant evolution that led Tenute Rubino to reach a production of more than 1,000,000 bottles per year, 70% of which is for export.

Tenute Rubino has achieved this important goal by taking care of every detail of production: from the vineyard to the bottle, each step has in common a modern reinterpretation of the aspects on which Puglia has built its oenological success. During these years, Luigi has had Romina Leopardi next to him, who, with her professionalism and overall vision, has developed a marketing and communication strategy strongly linked to the distinctive contents of Tenute Rubino. Starting from The Women’s harvest, an amusing open day in the Jaddico estate that, since 2009, is regularly open to journalists, opinion leaders and wine lovers. A feminine vision that finds many stylistic elements and contents in the visual choices made by the company and that, in 2015, is enriched by the participation to the Italian Association of Wine Women.

The vineyards are located along the Adriatic shore towards the inner land. The four estates have distinctive features that deliver wines with different characters.

Jaddico. Home of Susumaniello. The 110 hectares Jaddico estate, situated along the Adriatic shore, 8 km North from Brindisi, houses the native varieties of Negroamaro, Malvasia Nera, Susumaniello and Primitivo.In the 38 hectares of Marmorelle, 10 km North-West from Brindisi, Tenute Rubino grows young plants of Negroamaro, Malvasia Bianca and Malvasia Nera. The climate is cool and constantly ventilated by east winds.In Uggio, 100 metres above the sea level and 14 km South-West of Brindisi, the company grows the old vines of Primitivo, Negroamaro, Aleatico, Malvasia Nera, Malvasia Bianca and Vermentino. With its 125 hectares, Uggìo is the largest among the four estates. Punta Aquila is the smallest one, 15 hectares exclusively dedicated to Primitivo grapes.

OBEN
We use cookies on our website to give you the most relevant experience by remembering your preferences and repeat visits. By clicking “Accept All”, you consent to the use of ALL the cookies. However, you may visit "Cookie Settings" to provide a controlled consent.
Cookie SettingsAccept All
Manage consent

This website uses cookies to improve your experience while you navigate through the website. Out of these, the cookies that are categorized as necessary are stored on your browser as they are essential for the working of basic functionalities of the website. We also use third-party cookies that help us analyze and understand how you use this website. These cookies will be stored in your browser only with your consent. You also have the option to opt-out of these cookies. But opting out of some of these cookies may affect your browsing experience.
Necessary immer aktiv

Performance cookies are used to understand and analyze the key performance indexes of the website which helps in delivering a better user experience for the visitors.

Analytical cookies are used to understand how visitors interact with the website. These cookies help provide information on metrics the number of visitors, bounce rate, traffic source, etc.

Advertisement cookies are used to provide visitors with relevant ads and marketing campaigns. These cookies track visitors across websites and collect information to provide customized ads.

Other uncategorized cookies are those that are being analyzed and have not been classified into a category as yet.